Ah Yes! It is Christmas … Storytelling #4

Introduction – Laura McHarrie stumbled upon the subject of this her fourth project from the Story Telling Manual having talked about a Christmas Tradition in a table topic last December.  She has since embellished the story and fast forwarded it 20 years for the purpose of this speech.  During the research she realised just how important memories are for the mental health and wellbeing of the elderly.  The story is set in a care home where most of the elderly residents have a degree of dementia.  With a speech entitled Ah yes! It is  Christmas please welcome Laura McHarrie

Ah Yes! It is Christmas …

“And that’s Mrs McHarrie – sweet old dear in the corner.  Not!”  smiled Grace, the Care Home assistant to the new recruit.  “Watch out for her!  She is a stickler for routine.  I’ve seen her tackling Mr Jones with that stick of hers in the race to get her towel on the seat in the corner.  German tourists have nothing on her.”  The two chuckled.

“She came two years since, with a list of demands as long as your arm, and whilst she seems to have lost many of her marbles I’m not so sure”.  Grace added … “Watch this!”

“Cup of tea Mrs McHarrie, it’s 11 o clock”. Grace placed the mug on the table beside a gold silhouette of an ornate Christmas tree.  It wasn’t Christmas time, not even close.  This tree remained a constant all year and should anyone try to move it elsewhere all hell broke loose.

Mrs McHarrie, looked up at Grace and nodded.  Ignoring the tea she reached across the table to a battered blue box and pulled it on to her lap. She untied the ribbon, opened the lid and rummaged around.  After a few seconds she brought out a manky Parrot with no tail. She nodded as she hung it on the tree. 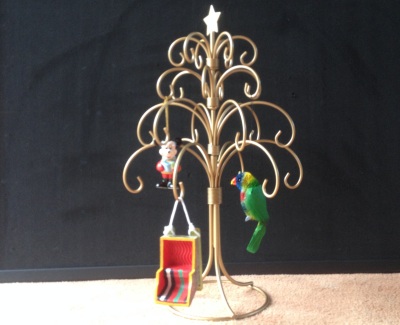 Ah the parrot, it had been a while since she picked out the parrot.  It was one of her favourite stories: they were so colourful the birds in Australia, and all so noisy too.  They had hired a camper-van to drive down the coast from Sydney to Melbourne.  It was on the way back via the Snowy Mountains where they stuck two of them.  Parrots that is.  They left a kaleidoscope of feathers in their wake.  They stopped at a place called Kurt Kurbain, (not really but even then she had trouble remembering names). That night they lay down in the snow and looked up into the midnight sky at myriad diamonds clearly winking at just the two of them.

The clock chimed 11.15 “It was that one perfect moment” she sighed to no-one in particular

Mrs McHarrie opened the lid and rummaged around.  After a few seconds she brought out a heavy-looking sledge and sighed again as she hung it on the tree.

Ah the sledge.  She bought this for the tree on her 10th Wedding Anniversary in Madeira.   The marriage was failing badly.  Most of the wet week away was spent walking in a vague uncomfortable silence.  However, that morning they had taken the cable car to the top of the Monte and chosen the woven basket sledge as their means back.  Suddenly they were on the ride of their lives, close to the cobbles, teeth and loose change chattering.  Toboggan drivers, pushed and steered from the rear, careering round corners and bends using their rubber-soled boots as brakes.  Skreeeech!

The clock chimed 11.30 “My word that was exhilarating”. She gasped to no-one in particular.  “Shame the marriage wasn’t quite so!”

Mrs McHarrie shrugged and opened the lid and rummaged around.  After a few seconds she brought out Micky Mouse.  She grinned as she hung it on the tree.

The clock chimed 11.45 – “Tee hee! That was fun” she muttered to no one in particular

She was coming to the end of today’s journey.  She had another hour before lunch to wallow in her memories.  She smiled wistfully as she carefully packed each decoration back into the box until this time tomorrow. These day trips were most enjoyable and a most welcome escape.  Her body was far too frail for such adventures nowadays even if her mind was still up for it!

Lunch will be at 1 then the Archers at 2pm. She liked the Archers, they are her friends.  They came to visit at 7 every night too.  Except Wednesday’s when she went to Toastmasters.

‘Is it Wednesday?’  She asked no one in particular.

The calendar on the wall said Wednesday.

Then her face cleared – a smile replaced the whimper and she said to no one in particular – “Never mind, never mind.  I’ll just make it up as I go along!”