… may break my bones but words can never hurt me?

If I ever needed confirmation that I didn’t want kids of my own, then last weekend was it!  These two had had six weeks apart from each other, the younger here in Dorset/Hampshire, the elder in Uganda.

You’d think they’d have had a lot to share and catch up on – wouldn’t you?  Well it would, indeed, happen that that was the case.  The weekend started with a series of verbal jabs which lead to some serious phyical ones that resulted in blood being spilt.

Thankfully by Sunday night the nails were drawn back but the verbal attacks had become quite, quite vicious.  The cat and mouse game had turned into big hunter teritory. 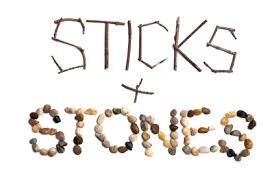 I’ve always been far too sensitive to words scored at me; whether they were aimed deliberately to hurt or not.  Every jab has a scar, some of which are easier to live with than others.

I hate to see these two damaging each other’s ego in this way because in doing so they potentially set the expectations of others doing the same.

As a reader, please do share your ‘bullied’ experiences, if you need some time to think have a listen to Sticks and Stones by Jamie T