The Story of Songthrush – The Writer’s Way

Prelude to the Turdidae Network:

In late spring, the Turdidae Network meets just before dawn at the edge of a wood in the south coast county of Dorset. Each chorus begins when Blackbird; striking with his yellow beak, sends out his mellow song. Then Robin and Nightingale join in and by sun up the network is in full symphony.

There are striking calls from the hungry for food and others to maintain contact with their flock, whilst other sweeter songs attract mates and discordant ones defend territories.

This is the Song Thrush Story:

Whinchat hopped along the ground, stopped, tipped his head as if he were listening intently. He didn’t stop over on the South Coast often. However, on the odd occasion it was quite the place to pick up some useful titbits of information. He had just arrived in from Central Africa. Whinchat pecked at an
early insect thoughtfully.

He was listening to the Fieldfare laggards, who were poised and hopping purposely, but fruitlessly pecking at the barren earth for worms. Their social outlook was much admired in the network community.

Every so often, another chuckling flock of Fieldfare alighted at a hawthorn hedge, to partake in berries for their journey north and join in the chatter.

“Haven’t seen Song Thrush for a long time, anyone seen what’s happened to him?”

“His eating habits leave a lot to be desired too. Whilst none of us is that keen on snails; smashing them against a stone with a flick of the head is going a bit far in polite society don’t you think?”

Just then, Song Thrush appeared from under the hedgerow.

The Fieldfare closed ranks just a fraction and ignored the interruption.

Delighted with the thought of a food fest, the Fieldfare stood to attention and listened.

“Pray tell us where we might find such a meal?” They begged Song Thrush.

When Song Thrush had given them detailed directions, the Fieldfare thanked him honestly and flew off, leaving none but Whinchat in their wake.

“You heard what they said about you Song Thrush? Why did you help those hungry Fieldfares?” Whinchat chirped.

Song Thrush paused and quietly offered articulately, “Whinchat my chum; friends may come and they may go but enemies accumulate. So, make many, many friends and excuse your enemies. Be grudge not and never, never in public.” 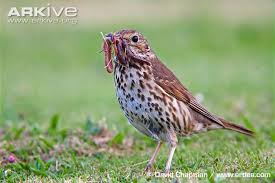 In this exercise from The Writer’s Way, Sara Maitland asks us to apply an extended metaphor to a fable with a poignant outcome.